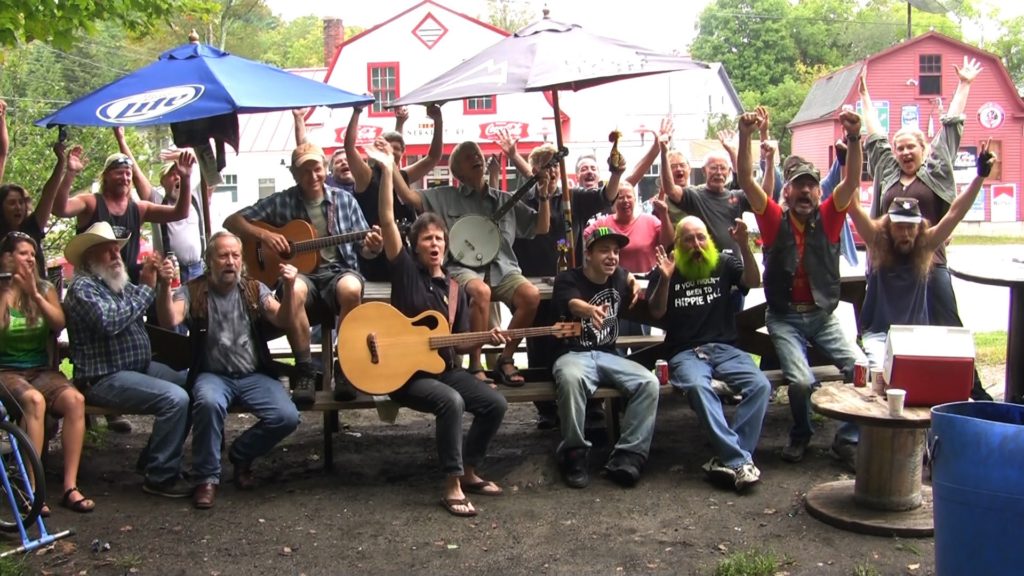 Here is a reprint of an article by Laura Jean Whitcomb from Kearsarge Magazine Spring 2013.

If you’ve driven through Danbury, you’ve driven by Hippie Hill – an unofficial gathering spot on the hill across from Dick’s Village Store where motorcyclists and rail trail users stop to rest, trade stories and play horseshoes. Now there are two songs about the 50-year-old site, th e most recent per­ formed last year by singer/songwriter Lindsey Schust and The Ragged Mountain Band.  Schust, a resident of Andover, wrote the song after visiting Danbury in 2008. “While waiting for a friend, I noticed a group of fun loving people across the street,” she says. “I decided to meet the folks on Hippie Hill. After hearing their sto­ ries and watc hing them play horse­ shoes, I started thinking how Hippie Hill is a special place.”

“In my country songs, you can hear the echoes of Cuban ‘son’ music and the beat of West African drums,” she describes. “You may not know why your foot is tapping, but it will be because I’m a drummer, so rhythm informs all the music I write.”

Schust’s 2005 album “D6nde Esta mi coraz6n” has found popu­ larity on Latin music radio stations across the globe. But, in the last few years here in New Hampshire, she’s been writing country western style music, currently finishing up songs for The Ragged Mountain Band’s summer album . “They will be country songs, some of which were inspired by getting to know the folks through the Hippie Hill video project. There will be a ‘small town’ theme – country living and country values, like neighbors helping one another out, and living off the land,” she says.